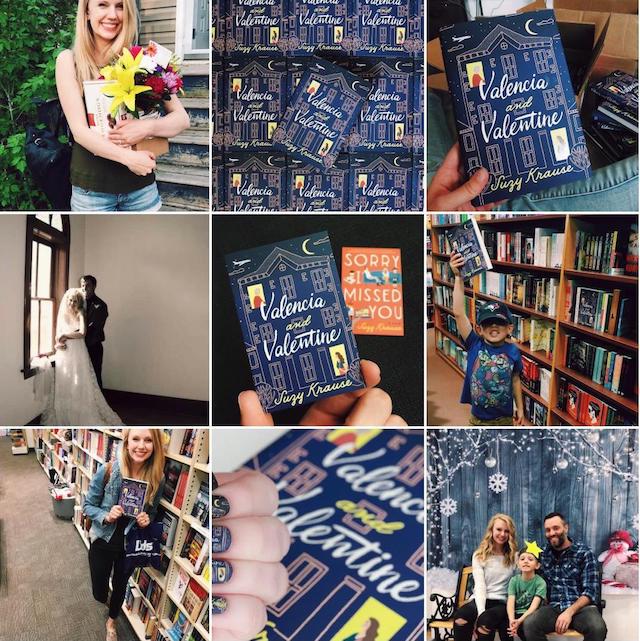 So here we are, eight days into 2020. I've gone to that website where they give you a picture of your nine most-liked pictures on Instagram from the past year (above) and it looks about like you'd expect.

I've been sick for every single day of 2020 so far. There's a blizzard. #WWIII is trending on Twitter and the hashtag is mostly people making flippant jokes about war (yikes). But I'm in a coffee shop, sitting by the window with an Americano, blowing my nose and watching the snowstorm. I'm the only one here. I'm warm. Still sick as a dog.* Listening to the Many Beautiful Things soundtrack and trying to work on novel three, which is giving me so much grief. So I figured I'd open up my trusty ol' Blogger in another window and, when my brain stalls in the book, I'll pop over here and write a sentence or two and then zip back over there. It'll work or it won't, but at least I'll feel and appear more productive. I'll look like I'm writing a novel, and maybe that will be enough to trick my brain into, you know, writing a novel.

What better time, then, to do my annual introspective study of the year behind me, wherein I use the alphabet to make note of 26 memorable things or lessons or events from that time period?

A -A few of my favorite songs that didn't necessary come out this year but which I listened to a lot this year: Agnes by Glass Animals, Mansion Door by Shakey Graves, Motion Sickness by Phoebe Bridgers, Catch Me by Marissa Burwell, So Down by Mother Mother, Chesapeake by Better Oblivion Community Center and Harmony Hall by Vampire Weekend

B - Book clubs! I visited Sam Macaig's book club, the Newcomers Book Club, the Sherwood Branch Book Club, and the Northern Lights Book Club (online). I was super nervous for all of them, but ended up having so much fun.
C - Cracked my tailbone when I fell down some stairs. That was at the beginning of December and it still HURTS SO BAD.
D - Didn't leave Saskatchewan, not even once, that I can recall. No wait—
E - Elise, my little sister, lives in Brandon, MB now, and we visited her this summer. So never mind! We did leave Saskatchewan for a weekend.
F - Finished writing and editing Sorry I Missed You, got a pub date lined up—it was such a faster process the second time around.
G - Got started writing a third book—and, before I'd finished that one, a fourth, because I am dumb.
H - Hospital visits: Just one—Scarlett broke her arm when she fell off a jungle gym.
I - Interviews. I did quite a few interviews coming off of the release of V&V, and the reason you probably don't know about them is that I'm scared of you. Public speaking isn't my strong suit, and some of the interviews were LIVE, which meant that I wasn't even able to be edited into coherence. But in the off chance that you happened to be in Mississippi in June and you tuned into the right radio station at the right time and thought to yourself, "Is that Suzy? Because that sounds just like Suzy, and she sounds like she's going to vomit," I'm here to tell you that, yes, it was and, yes, probably. This was one of my biggest fears going into the whole publishing thing and I don't know that I'd say I've conquered my fear of interviews, but I would say that I'm improving and that it's been very good for me to be forced to do something I'm terrified of.
J - Joined the Saskatchewan Writers' Guild.
K - Kindergarten! Sully went to school and it has been amazing for him. He loves it, and I'm so, so, so thankful.
L - Live music: Marissa Burwell, Kathleen Edwards, Close Talker, Shakey Graves, Nick Faye, Steven Page, the RSO (wow, that is a much shorter list than usual...)
M - Met a lot of really great new people—most of them were, surprise surprise, book people. Book bloggers, book distributors and promoters (shout out, Thomas Allen friends!), publicists, editors, etc etc.
N - No.
O - Oh, I finally got a haircut that I really liked. Several years ago, I got a terrible haircut that had sharp, pronounced layers (I unaffectionately referred to it as my "staircut" and no hairdresser has been able to sort it out properly—UNTIL TWENTY NINETEEN. Finally.
P - Paper Umbrella hosted my book launch party and so many wonderful friends came and made treats for it and made me feel special and happy and loved. I haven't blogged about it because last summer was so intense, but I should, still.
Q - Quit being a Tourism Ambassador for Tourism Regina. Not because I hated it or anything like that, but because I just don't have the time anymore. Sad. But! Before I quit, they sent me to Swamp Fest, Folk Fest, the Forward Currents Festival, and Winterruption.
R - Read 19 or 20 books this year. Many of them were written by friends, which was fun.
S - Scarlett turned three and Sully turned five.
T - Ten years married to Barclay!
U - Underwent two routine dental cleanings.
V - Valencia and Valentine was published in June.
W - Watched Barclay own his first full season as a business owner. I watched him work hard all day every day (and most nights) and was so proud of him, of his integrity and determination. We didn't have a lot of free time, but I think I'll always treasure this summer together anyway—late nights side by side on our laptops, working really hard at our respective dreams.
X - XXXII (I turned 32)
Y - Yes! I was really successful at growing strawberries this summer—comparatively speaking. Like, compared to myself last year and the year before that, I mean.
Z - Zipped out to the grocery store a lot because I'm terrible at just, like, doing a list and buying all the things on it once a week. I'm in there twice a day sometimes. It's whatever. I'll get better at it.

*Why do we say that? "Sick as a dog?" It's not like all dogs are sick all the time. Do dogs get extra sick when they get sick? More sick than people? I'm going to google this, hang on a sec...
Okay, I googled it and apparently it's just that dogs were viewed as undesirable animals in the 17th century and so there were a lot of idioms that used dogs as kind of an indicator of how bad something really was—"tired as a dog" "dog's breakfast" etc.