A COVER REVEAL! And So Many Other Words

At last, I get to share the cover for my second book. But first! Preamble!

This book is nothing—at all—like Valencia and Valentine. I just feel like I need to say that. People have asked if it's a sequel, or if it has similar themes, characters, anything—nope. But I did write both books, so it will bear a certain family resemblance, I'm sure. Personally, I think this one's funnier. Lighter. Fewer people die in it.

I got the idea for this one when I was out for a walk with Sullivan a few years ago. I'd recently finished writing Valencia and Valentine but I was not finished writing, period, if you know what I mean. I still wanted to sit at my desk and make stuff up, but I had no story. I had no characters, no hooks, no settings. So I put Sullivan in a wagon and I literally went out to find a story to write.

Sullivan loved that wagon; I could've walked for days with him happily reclining in there, watching the houses roll past—which was good, because I walked for probably two hours before I found this story. It was on a street full of old houses and mature trees that stretched their branches over the road like they were holding hands with each other, completely blocking the sky. I stopped in front of this massive white house with a creaky porch and three mailboxes. And I thought, this house looks like it's haunted, and also, I wonder if the people who live here get along with each other.

And then I thought about how fun it might be to write about a haunted house, and about tenants who are very different from each other and have nothing in common except this one thing: they all live in a haunted house. And then I thought about a friend of mine who'd recently suddenly stopped talking to me for no reason, and about a conversation I'd had with a different friend about that experience, about being "ghosted." And I thought that maybe the people who lived in the house could have that in common too—because it's kind of a universal experience, being ghosted, isn't it? And I thought I'd call it Ghosting Stories because of the ghosts in the house and the ghosts in the people's pasts (the title was the only part that didn't stick). And then I went home and started writing it.

I sold it to Lake Union at the same time as I sold V&V, its name has been changed to Sorry I Missed You, and it's coming out on June 2, 2020.

The cover process is easily one of my favorite parts of having a book published. Maybe the main reason I love it so much is that, unlike every single other thing about publishing a book, it's not hard—I just wake up to an email one day that's like, "Here are some possible designs. Which ones do you like and why?"

I've never had a hard time having and giving opinions.

I weigh in and my lovely editor, Alicia, adds her thoughts and my wonderful agent, Victoria, agrees with us (we all seem to be on the same page about basically everything and WHAT A BLESSING THAT IS) and then the marketing team gives their opinion (their opinion, obviously, holds the most weight). We pick a design and go back and forth with the designer, who swiftly chisels and whittles and doodles away at it until it's something that a whole bunch of people can agree on, which is like a magic trick.

The aforementioned magician is Liz Casal. I wish I could show you all of the designs, because even the "rough sketches" she sent were incredible. As it is, I'm only going to show you this one: 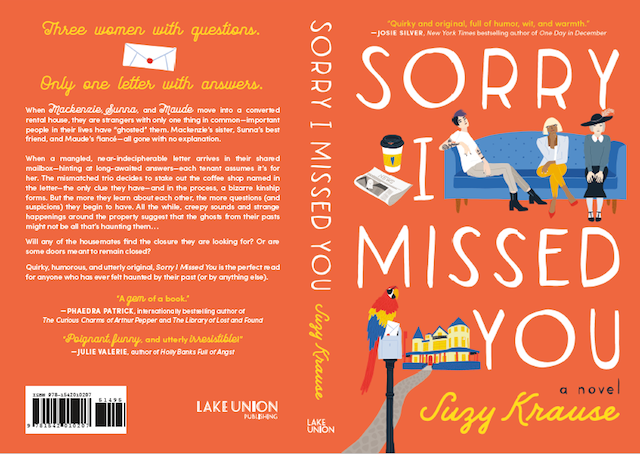 Isn't it great? I'm going to paste the promo text below so you don't have to squint to read the back:


A poignant and heartwarming novel about friendship, ghosting, and searching for answers to life’s mysteries.
When Mackenzie, Sunna, and Maude move into a converted rental house, they are strangers with only one thing in common—important people in their lives have “ghosted” them. Mackenzie’s sister, Sunna’s best friend, and Maude’s fiancé—all gone with no explanation.
So when a mangled, near-indecipherable letter arrives in their shared mailbox—hinting at long-awaited answers—each tenant assumes it’s for her. The mismatched trio decides to stake out the coffee shop named in the letter—the only clue they have—and in the process, a bizarre kinship forms. But the more they learn about each other, the more questions (and suspicions) they begin to have. All the while, creepy sounds and strange happenings around the property suggest that the ghosts from their pasts might not be all that’s haunting them…
Will any of the housemates find the closure they are looking for? Or are some doors meant to remain closed?
Quirky, humorous, and utterly original, Sorry I Missed You is the perfect read for anyone who has ever felt haunted by their past (or by anything else).

So that's what's coming down the chute next.
You can preorder it here.
at October 09, 2019