Out of Gas—But Also, Some News!

The kids' bus was a half hour late this morning, and for a minute there I thought it wasn't coming at all. Which would be fine if it were Monday or Wednesday or even Friday, but not today.

Today is one of two days I have, every week, where both kids go to school, where I have a glorious seven and a half hours of alone time. Where my house is silent, except for the occasional sound of me talking to...well. The appliances, mostly. (Don't pretend like you've never told your coffee grinder to hurry up or accidentally apologized to the fridge when you banged your toe into it on your way past.)

Anyway, the bus came, much to my utter relief, and I put my kids on it and I waved at them through the window as they disappeared down the street, and I went into my house and I yelled, "HALLELUJAH" because that is now part of my daily routine on Tuesdays and Thursdays. I made coffee and baked one of those pre-baked-but-not-all-the-way croissants and I sat at the kitchen table and smiled at the wall. Alone with my appliances and thoughts. At last.

Oh no! My thoughts!

That's the problem lately. My thoughts.

I used to really enjoy being alone with my thoughts. Even when they weren't particularly positive, I still enjoyed the room to hear them out, move them around, write them down. Often, that would lead to little bursts of creativity, and I could take the things I was thinking about and put them into fictional characters' heads and build stories around them.

But one day I stuck the key into the ignition of my brain and it made a sad little trying noise but wouldn't turn over. No sparks. No interesting thoughts, nothing inspiring, nothing creative.

It's probably a combination of a lot of things, and I've been troubleshooting in my head—is it the pandemic? Is it the lack of quiet time? Did I grow out of creativity? (Is that a thing?)

The thing is, I have never felt less sure of myself, less confident in my writing ability than I have since publishing that first novel. That was when the brain ignition thing happened. I don't know if this is a super common writer thing or what [feel free to weigh in if this applies to you] but it's not something I anticipated. I always thought that getting an agent would make me feel like a 'real' writer, and then I would never struggle with self-doubt again. And then I got an agent and struggled with self-doubt even harder and thought that getting a book deal would be the thing that legitimized me in my own brain. Then it was actually holding a physical copy of the book, and then it was selling another one (because maybe the first book was a fluke?). The goal posts move so fast it's like they're on wheels, and I am realizing that I'm probably just going to feel, always, like I'm not a real writer, unless I can figure out a way to make myself less dependent on my feelings about myself.

ANYWAY. That's a problem I'm having. And I have to confront it every time the kids leave me alone in my house to go to school. Which is probably not a bad thing? And until such a time as my thoughts become friendly and creativity-sparking again and I learn to rely less on external validation, I am trying very hard to celebrate the milestones that give me even a temporary feeling of being "a real author." The proverbial equivalent of taking a taxi since my car is out of gas. This week, it's this: 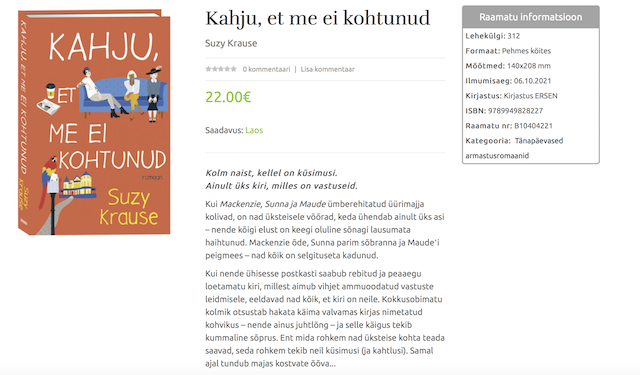 Sorry I Missed You was translated into Estonian and is now on sale there! And if you click on the screen shot above, it'll take you to an article or announcement or something of the sort which I can't read because it's not in English. Hopefully it doesn't say, "Suzy Krause is a big phony and not a real author."

My husband and I have LOVED your books and eagerly await the next. We became invested in the characters and so looked forward to reading more. You are a real author with a real gift of turning a phrase that made us laugh or pause. Thank you for sharing your gifts with us.

*waves hands in helpless but supportive gesture* You know I love every word you publish, but I am riddled with my own insecurities about creativity and do not have the answer.