we chose option c: walk around town and try to find a bus. a risk, as there would be no more trains in or out that day, and we weren't sure about hotels or b&b's being open anywhere near. but we'd heard of the isle of skye, and we thought we might be close. if there was one "plan" we had, it was to end up there at some point. we found a tourist information office, boarded up and looking dilapidated. it did us no good.

the thing about exploring in the off-season is that everything is pretty well deserted--which is fantastic if you don't like crowds and line-ups and feeling like a tourist. it also adds an element of adventure: you're always asking yourself, "are we stranded? where are we? where do we go? how do we get there? why didn't we bring a map? are we going to live on the streets of kyle of lochalsh for the rest of our lives?" which is why, if you explore in the off-season, you should most definitely go with someone that you like and love, someone that you trust and find good-looking. someone who will not strangle you in an intense moment of "oops, i think we're stuck in the middle of nowhere again." but, like i always say, thank goodness for garbage men. {i always say that.} we found a helpful one loading a bag onto the back of his truck who told us, "you're in luck, kids." and pointed us in the right direction. there would be one bus in and out of kyle that day, and it was arriving and leaving in a half hour. and it was going across the bridge to the isle of skye. skye turned out to be a lot closer than we'd originally realized. the bus ride was fifteen minutes, and the bus driver dropped us off in a tiny town called broadford, which consisted of a pub, a cafe, some elderly people, and a post office where we tried to buy a map. i say 'tried' because we got chatting with some locals and completely forgot what we were up to in there. they did, however, give us directions to armadale, where they said we could catch a ferry back to the mainland, warning us that the ferry would probably not be running and then we'd be really stranded. we smiled and said, "ok. thanks." i think the idea of being stranded was getting less and less threatening.

things always seem to work out. you know, sometimes not at first, but in the end i think.

for example, the bus the post office crew in broadford put us on took us to the seashore and dropped us off. we saw no ferry, no town. nothing. we inquired.

"this is the stop," the bus driver huffed. "you should've rang the bell back at armadale. you'll have to walk." and then he shut the doors and drove away.
ok.

the beauty of it was that barclay had just been saying how he'd love to get out and walk a bit, and it really was a beautiful day--probably only a few degrees below zero. and the isle of skye? breathtaking. nobody in their right mind would throw a fit about having to walk around on it for a bit.

so, having a general idea of the direction we should head, but not knowing how far to head in that direction, we started walking.

and it was fantastic, and i thought to myself, "things always seem to work out."
and i prayed a thank-You and smiled at the quiet water.

and before we knew it, almost too soon, we found the ferry. the office was open and the man inside looked surprised to see us.

"yep, it's going across to the mainland today. you're pretty lucky--this is the only crossing its making this week. some weeks we don't even send it out in the wintertime. it leaves in three hours."

so we bought our tickets and went off to spend those three hours exploring the island. 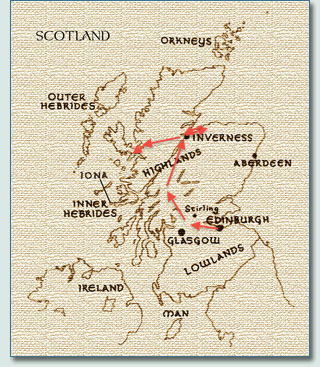 Email ThisBlogThis!Share to TwitterShare to FacebookShare to Pinterest
labels: scotland

I've never visited Skye but I'd love to - these are gorgeous photos!

I want to crawl into your pictures & live there. Absolutely beautiful!

I love the picture of the red row boat on the pebbles :)

I can't take it anymore! I'm beyond jealous of your trip. Looks, and sounds, like you had an amazing time :)

There's a place in the world called Isle of Skye? How wonderful. Beautiful pictures!

traveling during the off season is the best. Tourists are so annoying.

This pictures are so atmospheric!

And what are the chances with the ferry--it was obviously meant to be! I love it when that happens!

*sigh* your trip sounds fantastic! I love that you didn't go with a set plan...just went and explored. That's how all vacations should be :)

WHAAAAAT!!!
sarah: go there. now. you're not even that far away! and the train ride there is amaaaazing.
i can't believe you've...
GO!

me too. scotland is maybe my favourite place. ever.

aw thanks! these are some of my favourite from the trip. i love the colour contrasts there. cloudy, white, and then bright pops of red or green...

haha--well i totally did. i'm kind of homesick for it, if that makes any sense at all? so i'm kind of jealous too. i feel like it wasn't even me who went to these places and took these pictures...:)

yes! which is part of the reason there is a little girl in saskatoon named skye. :) her parents liked the island too i spose!
{and thanks!}

haha AGREED. {even though i technically was one.}

I KNOW RIGHT? what if we'd been stranded there for a week? or two? missed our plane?? YIKES!

speaking of vacations...you should probably blog about YOURS... i miss you blogging...

Yes. Well. I think my blog has long since died...so that provides a problem. Plus I'm not nearly as eloquent as you are...I was making "Snow Angles" on my blog, for petes sake! I can't even spell Angel correctly! But maybe sometime soon we'll get togeather, have a cup of coffee, maybe get "blitzed" and talk at length about our vacations. *sigh* I miss you!

um: a) GET YOUR BLOG UP AND RUNNING AGAIN. spelling angel is not a prerequisite.
b) heck yes! liiiiike...next WEEK????

I definitely remember those "are we stranded or...?" moments the most after a trip. Adventure is awesome.