day nine blew in at 165 mph {very literally}. headlines read, "HURRICANE-FORCE WINDS HIT SCOTLAND AS UK STORMS CAUSE CHAOS," schools were closed, buildings were blowing over, wind turbines were bursting into flames {again, literally}, and the police were out making sure everyone stayed in. 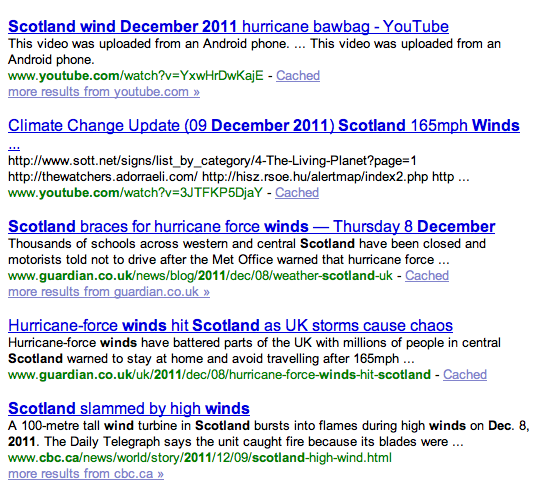 barclay and i, of course, were oblivious to the catastrophic weather. we were out walking around in it, wondering where everyone had gone and, for pete's sake, what was with all the police everywhere? and, oh, are those bricks flying off the tops of those very tall buildings?

you might not know this already, but we're from the canadian prairies. it's like a cross between a deep freeze, a snow globe, and a million vacuum cleaners here. i didn't even wear my winter jacket that day. i'm not trying to sound all cocky and tough, it's just that if there is one thing i think i'm fairly resilient to, it's bad weather.

we walked by the shore to grandma and grandpa's house where we were greeted with concern and soup {my favourite combo}. we watched the trees bend over from the safety of the living room and listened to the wind howl like a hundred people outside the window, screaming their lungs out. as though we were famous and hiding away from our fans, we sipped tea and looked through photo albums while grandma told us stories about barclay's mum as a young girl, ignoring the peoples' adoring cries.

we walked from there to brian and anne's house, where we were greeted with a little more concern and some cake {score again}. the kids were off school for the day, so we hung around with them, visited, played games.

from there, we were off to uncle stephen's place, so i could meet his family for the first time. do you know what is kind of freaky? riding a double decker bus in that kind of wind. but the trip was worth it; more new friends, more haggis, more hilarious conversation. scottish television and chranachan. good times.

i miss those people. i wish the winds that day would've blown scotland right over to canada.

we made it through the day without being impaled by debris, so that was good, and right before we drifted off to sleep, my eyes popped wide open. "barclay..."

"if the weather clears up, can we go to london tomorrow?"

"yeah. just for the afternoon. i want to meet big ben."

the wind cheered outside the window, loud enough that i didn't have to.

Email ThisBlogThis!Share to TwitterShare to FacebookShare to Pinterest
labels: scotland

165 MPH? That is absolutely bananas! Sounds like a lovely day though :)

As though you were there when it was windy! As you prob know by now the British get slightly hysterical over weather that is not the norm :)

And concern and soup sounds perfect!

haha it's true---fair enough though, what with all the old buildings falling apart with every gust of wind i spose! :D

We only need 1 snowflake for the entire rail network to stop do goodness know what a bit of wind could do!

hahahaha for real! that's why i love the uk. everything is so much more dramatic. i love dramatic.

I love concern+soup! And I love giving concern+soup... but no one in my family likes soup yet. Or breakfast in bed. They're no fun.

well i like breakfast in bed & soup...so...you could bring your love of giving those things over to my house? say, saturday? :)